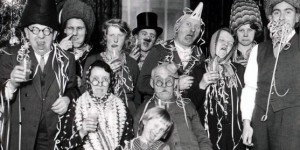 Aquatint: (ital. aqua forte = aquafortis / acid, tinta = ink): *Intaglio technique rendering larger areas for colour effects. The *printing block is covered with acid-free bitumen or colophony powder either through a sieve or in a so-called dust box and eventually heated from underneath, thus causing the powder particles to melt and merge with the *printing block. The ensuing step is the *etching, allowing the acid to penetrate only the minute gaps in the fine-grained surface. The thus emerging aquatint layer is subsequently inked, the colour strength being dependent on the dust grains’ degree of fineness, their density and the depth of the *etching. Drawings in clear lines can be done on the same printing block prior and / or subsequent to the aquatinting stage (*line engraving, *drypoint engraving).

Asphalt varnish: A mineral pitch particularly suitable as a coating agent in *intaglio work, given its acid-resistance. It is photosensitive when applied in thin layers and soluble in turpentine, benzine and petroleum.

Biting: In the etching technique: In addition to a direct mechanical processing of a *printing block (e. g. *drypoint engraving), ink-accepting lines and areas lying below the plate’s surface can be achieved through etching with an acid (e. g. ferric chloride). The duration of the immersion of the printing block in the acid bath is the determining factor for the etching depth and, as a consequence, for the strength of the colour in the resulting print. To achieve a differentiated strong colouring on the *print carrier (e. g. *paper), the etching process (i. e. the acid bath) can be repeated in a number of stages, consecutively stopping out those areas which have reached the desired degree of etching using *asphalt varnish, thus protecting them from further biting.

Collage (fr. coller = to glue, to paste): Various materials and objects the intended purpose of which may be completely alien to art are glued to a support, resulting in a three-dimensionality or raised structures. Collages can be used as grounds for graphic prints which themselves allow of applications, thus resulting in collages. However, it should be established individually whether they may be classified as multipled artworks or be regarded as one-of-a-kind items.

Coloring: Overdrawing or overpainting in colours of a graphic print.

Copperplate engraving: In this manual method of preparing plates for *intaglio printing, a uniformly thick, ground and polished copper plate is coated with a thin film of varnish or wax and sooted. Then the drawing is transferred onto it in reverse and worked into the plate line by line with a burin. In doing so, the copperplate engraver pushes the burin forward with one hand, resting the flat of the other hand on the broader end of the chisel-like tool with verying pressure. Thereby, cuttings are worked out of the plate, causing ridges to emerge along the cuts which here, unlike the *drypoint technique, are eventually removed with a three-edged scraper. Characteristic of the hard, stringent lines are the so-called tailles caused by the varying pressure exerted during the engraving. As the further processing of the plate is in *intaglio technique, the ink must be rubbed into the lower parts of the plate using rollers or swabs and then wiped off the raised areas with gauze. In the press, the ink is then released onto the dampened sheet of paper under high pressure which also causes the edges of the plate to imprint themselves into the paper.

Drypoint engraving: *Intaglio printing method in which the image is scratched with a needle directly onto the *printing plate (mostly a harder copper plate, at times a softer zinc plate). The burr thrown up forms sharp edges along the scratched lines. As during the inking of the plate the burr traps more liquid, this will cause the desired and typical fuzzy effect when printed, the so-called drypoint effect. The extreme pressure exerted by the press and the repeated wiping of the plate quickly wear down the burr, making necessairy a treatment of the plate through *steel-facing in order to achieve a larger number of copies.

Edition: Total number of executed single copies in multiple art. It is the artist’s right to determine the number of copies, a limitation the purpose of which is to protect artists and collectors against unauthorized duplicates. The overall number of copies is serially numbered in Arabic numerals in the form of a fraction in which the numerator indicates the individual number of a given copy and the denominator the overall number of copies (e. g. 25 / 55, copy no. 25 out of 55). In addition hereto, so-called E. A. (Épreuve d’Artiste), A. P. (Artist Print or Proof), H. C. (Hors de Commerce) and “Künstlerdruck” are executed for the artist’s personal needs. These prints are mostly numbered in Roman numerals to which one of the above abbreviations is added (e. g. II / XV E. A.). As far as graphic prints are concerned, the printer, too, receives a number of copies designated as P. P. (printer’s proof).

Etching ground: Acid-resistant lacquer coat of *asphalt varnish, wax a. o. In some varieties of etching it is applied to the printing plate in order to protect them against the biting effect of the acid.

Heliogravure (gr. Helios = sun): = photo-etching = photogravure (*intaglio printing technique, *etching). First an unscreened half-tone negative is made after a model. From this negative a slide is made and then copied onto a parchment paper previously photosensitized, i. s. coated with gelatine. The gelatine-coated areas subsequently exposed to light harden, their thickness having been altered according to the varying incidence of light. The thus emerging gelatine relief is a precise impression of the half-tone gradation of the copied image. During the etching process taking place subsequent to lifting off the paper using warm water, it allows the acid to penetrate the *printing block (here: metal plate) previously coated with *aquatint to different depths. This method allows of a reproduction accuracy almost equalling that of photography.

Line etching: *intaglio printing, *etching. Following polishing, degreasing and heating, the *printing block is covered with a layer of *etching ground. Then the drawing is worked into the etching ground using an etching needle and the back and the edges of the plate are coated with *asphalt varnish. In the following acid bath the lines and areas rendered blank are etched to different degrees, according to the duration of the biting of the acid into the printing plate. The etching ground is subsequently removed and the ink is applied with a roller and fabric swabs onto the heated plate, eventually wiping the ink off the plate’s surface. The ink now trapped in the grooves etched into the plate will print on the *print carrier (mostly *paper) as lines.

Linocut: This *relief printing method employs a linoleum sheet as a *printing block, consisting of ground cork, resin and oxydized linseed-oil varnish, applied to a jute fabric, an inexpensive material easy to use. Once the drawing has been done in pencil or ink, the plate is worked on with various tools as knife-blade cutters, gravers or etching needles, while, by contrast to woodcut, there is no grain offering resistance. Therefore, the linocut method lends itself to fluent lines and larger flat areas alike. The printing is, as in the case of the woodcut, either monochromatic or polychromatic.

Manière noire: This manual *intaglio technique is suitable for soft, subtly graded half-tones. The preparation of the copper plate involves a systematic roughening done using a steel rocker, a semicircular steel blade finely fluted at its bevelled edges which is vigorously rocked lengthwise, crosswise and diagonally over the entire surface, leaving a close-meshed grid of fine lines on the plate. Then the image is worked into the surface using a scraper. As the ink is only trapped by the roughened areas, brighter tones can be achieved by deeper scraping-out and burnishing.

One-of-a-kind item: Artwork executed in only one copy.

Original: As this term is used to designate both a one-of-a-kind artwork and an *original graphic print it is equivocal and lacks accuracy.

Original graphic print: In *graphic prints this term refers to individual prints and the number of copies for which the design, the *printing block, the printing proper, the printing supervision and the signatures are done by the artist.

Paper (lat. papyrus): Flat material consisting of mostly plant fibres, at an area weight between 170 and 1,000 g / sqm designated as card. The choice of the paper has a great influence on the result of any graphic work. Therefore, over the years a multitude of special papers was developed, such as copperplate printing paper.

Print carrier: Term referring to the medium receiving the print from the *printing block. Usual print carriers are *paper, glass, plastic or metal plates and fabric.

Relief printing: Includes all printing techniques involving raised impressing elements of a *printing block. Only these elements are inked up, while all areas not standing out in relief remain free of colour and therefore blank on the printed medium.

Screen printing: Pervasive printing technique in which the *printing block consists of a sieve-like fabric normally stretched over a frame when used in artistic prints. The fabric serves as the basis  for the image to be printed. This is done so as to leave precisely those areas permeable which are designed to impress onto the *print carrier (e. g. paper), while the remaining, non-printing areas are coated. A prepared screen ready for printing is called a stencil. During the printing process, the ink is pressed with a squeegee through the permeable parts of the mesh onto the *print carrier. For each colour a new screen is used the manufacturing of which can largely vary according to the method or material employed. In common use are hand-cut, wash-off, paper and – most wide-spread today – photographic stencils. Here, the screen is coated with a photosensitive emulsion layer. Any opaque object between the source of light and the coated screen can be copied onto the screen. The ensuing exposure hardens the areas receiving the light and leaves them impermeable to ink, while the areas protected against the exposure remain soft. They are eventually washed off, leaving the screen mesh open to printing ink.

Soft ground etching: In this variety of *etching, the heated plate is coated with a soft and sticky varnish instead of a *hard etching ground. A sheet of transparent paper is placed over the plate and the drawing is then done by the artist using a pencil or a chalk. When the paper is eventually removed, it also lifts the ground off the drawn lines and areas, leaving them blank for etching. Unlike *copperplate engraving, here, the lines are rendered soft and dense.

Steel facing: In *etching, particularly in *drypoint engraving, the *printing block – in this case a metal plate – is subject to rapid wear caused by the repeated wiping and the pressure exerted by the press. To avoid this, the plates are frequently faced with a thin steel coating through a galvanic bath. Over the following processes it is mainly the steel facing that is subject to wear, while the plate carrying the drypoint engraving is protected, thus making possible a larger number of prints.

Zinc etching: By contrast with *etching, this *relief printing method allows a direct application of the drawing on the metal plate with an acid-proof liquid such as *asphalt varnish. The *printing block is then etched with nitric acid, leaving only the protected areas, i. e. the drawing, raised and able to impress paper when subsequently printed.