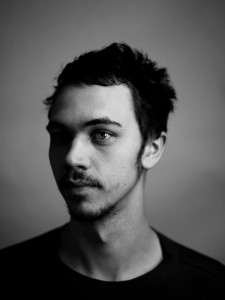 The Intaglio Print Studio 55 limited inaugurates its new
gallery-room with an exhibition by Los Angeles-based
emerging artist Miles Lewis.
The first participant of our residency-program, Lewis
shows both older works and prints created in our studio
during his stay in Berlin.
It’s his first European solo-show.

Lewis is interested in the widening of established techniques
of printmaking through contemporary possibilities.
Thus, he combines digital processes with more physically intensive
methods such as photogravure, alternative photography, and a wide
range of other materials, pressed to paper. 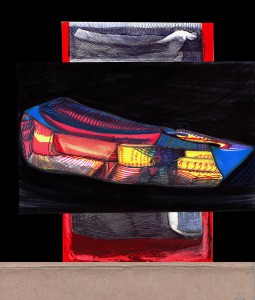 His subjects match his formal ideas. He reconstitutes and abbreviates
symbols through absurd, humorous, and mysterious accents.
The weight of bricks, the male torso, the allegorical portrait, and the
silhouette-as-ghost all feature as characters.

Lewis was born to a notable California family of performing artists,
including actors Geoffrey and Juliette Lewis and his mother
Paula Hochhalter, a noted cellist. Surrounded by music and dramatic
arts, he developed a profound interest in poetry and philosophy.
It was in visual arts, that Lewis distinguished himself.

He studied at the Valley Art Institute until the age of 18. Within that time,
he began producing linoleum block cuts. After the Institute, he committed
a year to intensive painting and art historical study at the New York Studio
School, in New York City.
In New York he experienced intaglio and aluminum-plate lithography at the
Robert Blackburn Workshop. At 19, he returned to California, inherited his
old school, and has directed it as the Valley Art Studio School, ever since.

This past Spring, he graduated with a degree in Printmaking from the California
State University at Northridge. There, he studied under the painter Victoria Reynolds,
and the painter-printmakers Erik Mark Sandberg and Michelle Rozic. He has worked closely in workshop and exhibition coordination with Xavier Fumat and Daniel Freeman, both printmakers from the legendary Gemini G.E.L. workshop, Los Angeles.
A community educator and curator from the age of 17, he understands printmaking “as a foundation for image-making, through its educational potential as a historical bridge, in an expanding universe of mechanical reproduction.”

Lewis is now organizing the Valley Print Studio, a community printmaking workshop and gallery. This institution will present the artform as the cornerstone of an interdisciplinary foundation in art.